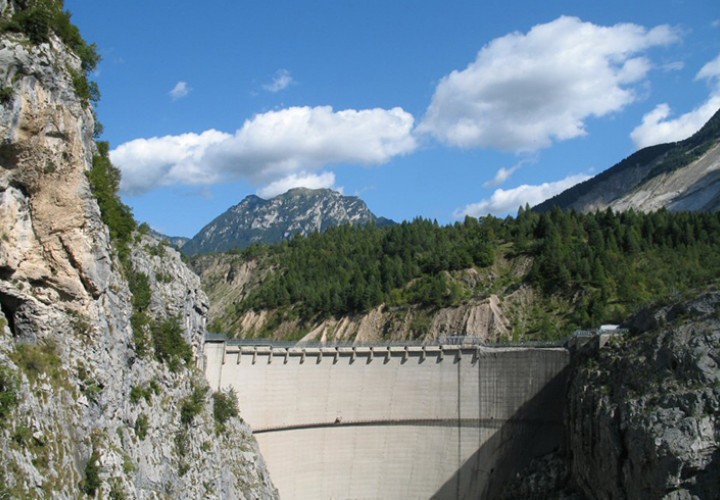 The Vajont dam
The construction of the Vajont dam in the narrow valley and the subsequent disaster remain a dramatic chapter in the history of Erto and Casso, characterised by a radical upheaval that dramatically changed the landscape and the particular way of life.
The Centro Visite di Erto e Casso (Visitor Centre of Erto and Casso) is one of the most important and complete documentation centres on the Vajont disaster and a valid point of reference for studies and research.
The village of Longarone was completely destroyed, the community of Erto was dismembered going from 2000 to 400 inhabitants and about 2000 were the number of victims.  Still today a 2 km landslide fills the old Vajont valley.

It all started at the beginning of the century, when some private companies realised the potential of exploiting a widespread water basin of the Piave River to produce electricity.
Between the ‘30s and ‘60s a number of projects were gradually drawn up and improved, leading to  the creation of several dams, reservoirs and hydropower plants in multiple locations along the Piave river and its main tributaries.
The construction of a great complex network of penstocks was started, connecting the various reservoirs and allowing the same water to be used several times.
With this logic of rational and widespread use of the basin of the Piave, the Vajont dam took on a key role: in fact the water from all reservoirs in the valley of the River Piave were conveyed to the dam and were then channelled into the artificial lake of Val Gallina, the filling reservoir above the power station of Soverzene.
In fact, it was precisely in relation to its important role that the Vajont dam was redesigned and expanded to become the "Grande Vajont” (Great Vajont) project.
In 1957 the company S.A.D.E. from Venice submitted the final project and started work that was completed in 1959.

The dam
The dam, a 264.6 metre high arched construction, was the largest of its kind in the world and the second overall.
Nearby rose the worksite and the accommodation for workers, of which the foundations are still visible along a short trail that overlooks the dam and provides an excellent view of the valley and where the first road running from Erto down to the Piave valley, dating back to 1913 , can be seen.
To build the "Great Vajont" S.A.D.E. also forced the expropriation of all the houses and land in Erto located along the banks below the altitude of 722 mt., ignoring the protests of many of the inhabitants of Erto who gathered in a "national committee" that was set up to oppose the expropriation.
No one wanted to abandon their homes and their land, especially in the valley where the soils were the most fertile and that at the time, along with cattle, were their only wealth!
The harsh struggle not to lose what for generations had been their life was really hard, but unfortunately all in vain.
So the first houses were built in the area of Valuta and with the start of the reservoir, the dam itself and the Cerenton bridge (destroyed in the disaster but now being recovered) these were the only links with the villages to the left of the lake.
The dam was completed in September 1959 and the following year it was commissioned and the reservoir was filled.
Already with the first fill of the reservoir a general instability of the banks of the lake and mostly of the left bank came to light.  In fact the slope had signs of movement tilted trees, cracks in the ground and cracks on the walls of dwellings.  On the 4th November, 1960 there was a landslide  into the lake and a long M-shaped fracture appeared in the top part that formed the future detachment of the landslide of 9th October 1963.

The catastrophe
Over the years that followed these alarm signals became more frequent and obvious and despite S.A.D.E continued to deny the danger, everyone knew that Mount Toc would give way; it was only a matter of time.
On the evening of 9th October 1963 a landslide of more than 260 million cubic meters, with a length of more than two kilometres, a width of 500 metres and a height of about 250 metres, fell into the lake at an estimated speed of 100 km/h .
The force of the mass created two waves, one of which went upstream crashing casually along the banks of the lake and diverted by the crags of rock, destroying the villages of Fraseign, Spesse, Pineda, Prada, Marzana and S. Martino, taking with it the solid stone constructions ripped out of their foundations, whereas the other went towards Longarone.

This wave went right over the dam and lapped the lower houses in the village of Casso, located 240 m above the dam; it then channelled into the narrow gorge of the Vajont, gaining more speed and power and once it came out of the gully, the 70 metre high mass of water gushed into the valley of the Piave at a speed of 96 km/h razing the town of Longarone and some nearby villages to the ground.
Nothing was spared and the day after the landscape was completely white, empty and barren and there was only despair on the people’s faces.
For many months every type of debris, wood and furniture, together with decaying animals floated on the lake that continued to rise dangerously threatening the village of Erto and those spared by the wave.
To solve the problem of the rising lake, water had to be pumped out beyond the Pass of S. Osvaldo through large drainage systems to make it flow into the river Cellina.

The consequences
This unnatural flow lasted for several years until the by-pass that had been submerged and partly damaged by the landslide was restored; only then was it possible to restore the water flow in the Piave valley and completely empty the remaining lake.
The consequences and effects of these events, especially on the surviving population of Erto who stubbornly and bravely fought and chose to continue living in the valley of origin, have never been properly assessed and considered.
Only after a play that was staged by Marco Paolini in the squares and broadcast on television and the film “Vajont” shot by Renzo Martinelli, has public opinion and also the ordinary people become more aware and concerned with the Vajont problem.
The most obvious impact is still and will always be the changing landscape and the geographical and morphological disruption of places; where there was once a deep valley, there is now a mountain; where there was once a big lake, there is now an eroded and uneven valley; in place of meadows and inhabited huts on the Toc there is now a huge slab of white stone.
With the passing of the years the weather and Mother Nature have partly remedied disaster, because the waters have reshaped the beds partly restoring the water supply, the pioneer vegetation has gradually colonized and revived the slopes again and have slowly regained possession of the territory.

(Source: Website of the Municipality of Erto and Casso - The link you are accessing might not be in English.)