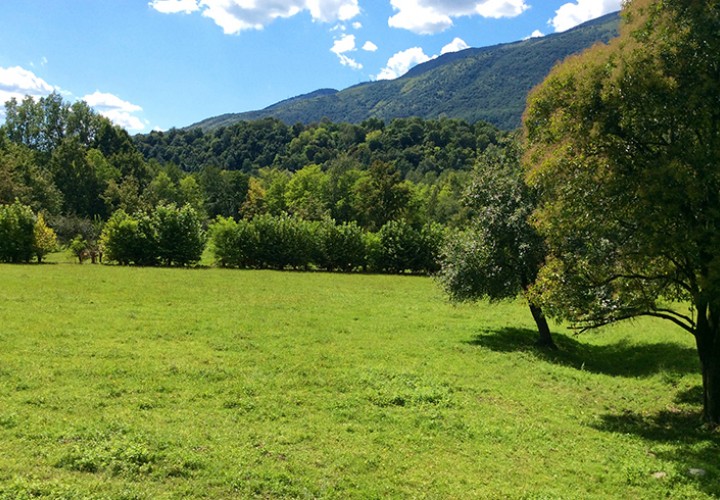 The only example of a natural and rural park in Italy. Since 1998 it has been part of the Europarc Federation organisation that protects and develops the parks of Europe.

It is located at San Giovanni di Polcenigo in the Province of Pordenone and extends over almost 40 hectares in the Parco Fluviale del Livenza against the backdrop of the Cansiglio mountain range. It is unique in terms of the variety of flora and fauna, the meadows dedicated permanently to grazing and the water meadows. Of extreme importance is the breeding of animals such as sheep, cows, pigs and horses, focused on research and experimentation. This activity also involves the cultivation of old varieties of regional fruits to protect these from extinction.

Beekeeping for the production of honey is also important. There is also an interesting area dedicated to medicinal plants (rue, lungwort, tetterwort, etc.): in this space the visitor can see unique herbaceous species that normally grow in different sites.

The Park has two Lodges, with a total of 30 beds, and a lecture room seating sixty that is used by schools, public and private Bodies and Associations who wish to undertake naturalistic agro-ecological, educational and cultural activities.

The land was bequeathed to the Municipality of Polcenigo by Mr. Luigi Bazzi, who died on 11 September 1951. As expressly requested in his will, after his death a foundation was created in his name and that of his mother Ida.

On 9 January 1976 an agreement was signed by the Province of Pordenone and the Foundation that establishes “the educational nature Park in Colle di San Floriano in the Municipality of Polcenigo”, with the goal of creating a business-park protection.

The Lodges were restored and the natural environment was improved through an important project of forestry and soil reclamation, the introduction of significant plant species and the creation of trails and refreshment areas for visitors.

The Park as it is today was opened on 8 November 1980. Since then, in addition to environmental protection, it has implemented agricultural recovery initiatives with the introduction of cattle, pigs, sheep, horses, farm animals, bee keeping, medicinal plants and berries.

In 1991 on the occasion of the IV Congresso Nazionale dei Parchi Minori (National Congress of Smaller Parks), the Park was designated as “rural” and today it is still the only example of a rural and natural park in Italy.

In 1998 it became part of the European Federation of Parks – EUROPARC, the international organization that protects and develops the parks of Europe.

In May 2006 the Province of Pordenone and the Fondazione Ing. Bazzi e Madre Ida (the Bazzi and Ida Foundation) entrusted the management of the Park to the ERSA - Ente Regionale per lo Sviluppo Rurale (regional body for rural development), until the beginning of 2011.

Since April 2011 the Fondazione Ing. Bazzi e Madre Ida has been directly responsible for the administration and operation of the Park.

Within the Park is the Chiesa di S. Floriano (Church of Saint Floriano) dedicated to the courageous soldier from Lorch, who was martyred in 304 A.D. It is an ancient parish church built in the early Middle Ages: the first document that refers to it is a placitum of the Lombard Emperor Liutprando, of 743 A.D.

The Church had certain privileges: the monopoly of baptism, the right of burial of the deceased and the collection of tithes.

The building offers a collection of beautiful late Gothic frescos of the local Byzantine school. These were local artists inspired by innovations introduced in Friuli in the second half of the 14th century by Vitale da Bologna, a post-Giotto painter.

In the apse there is a Christ within a mandorla-shaped aureola, the Evangelists, the Apostles' theory and Velarium; in the apse arch Saint John the Baptist and Saint Florian (or the Prophet Daniel); in the triumphal arch the Annunciation and Virgin Mary's Crowning; in the panels of the arch Saint Orsola and the eleven thousand virgins and Saint Florian before Aquilino, in the West and South walls of the Deposition in the Holy Sepulchre and the Transport of the body of Saint Florian.

Apart from the Christ in the mandorla, from the twelfth or thirteenth century and the Deposition in the Sepulchre, of the local Byzantine school, all other frescoes date from the fourteenth century. The church is open for visits every Sunday or upon previous booking.

How to get there

Calculate the route to reach us