From the Literary Parks to Mosaic City 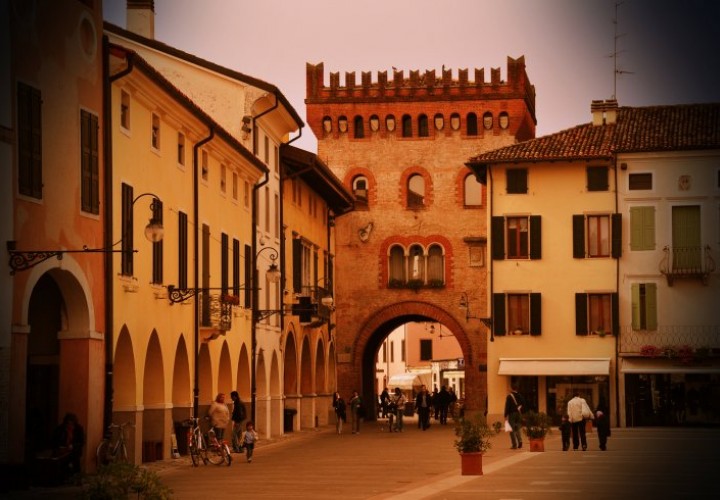 The route starts at the central square known as piazza Aquileia in SESTO AL REGHENA (km 0.0). We take via Zanardini and then, keeping to the left, the foot and bicycle path which at the roundabout continues to via Levada; at the end it becomes a dirt road, and at the fork we keep left for via Piave. After several metres we cross a lane and continue left on a trail that ends at a rest area. We go forward on a dirt road, ignore a small crossing and go over a small bridge on the pretty Versiola canal to arrive at the little church of San Pietro (detour right for 100 metres). As the dirt road ends we cross a paved road and continue along via Stalis.

At the bridge on the Lemene River we turn right into a dirt road to discover the Stalis mills (km 4.6). We go on, ignoring the side streets and arrive at the Spring of Venchiaredo (entrance to the right about 50 metres). We continue, returning to the asphalt, we pass a crossing, (to the right in 1.0 km Cordovado) we go straight on, passing a small lake on the right, and at the STOP sign turn left into via Casette (Provincial Road 41) which we follow until a STOP sign where we turn left (indications for Bagnarola) along via Monte Santo. After about 100 metres we turn right into the narrow via Viali and, just after the bridge, we turn left into via Molini.

We pass the graceful BORGO MOLINO (Mill district), and then the church of San Rocco (with a rest area and drinking fountain) and we arrive at the STOP sign, where we go right, travelling along via Vissignano. We follow Provincial Road 28 for about 500 metres and then turn right into via Gleris (drinking fountain) (km 9.6). After a small bridge over the Versa channel, a dirt road begins, and at a small fork we keep to the right, pass the railway and arrive at GLERIS at the end of the dirt stretch. Without crossing State Road 463, we follow it on the left, past the drinking fountain and keeping to the left, we takevia del Cristo. The bicycle path begins again after the crossing; we go once again over the railway, and the bicycle path ends where we arrive at an open space with a church.

We have arrived in SAVORGNANO. (To the left the small church of Santa Petronilla in 2.3 km). We turn right into via Savorgnano, where we take the bicycle path on the left; we go over the railway crossing and when we are close to the hospital and the bicycle path we turn left, heading onto the right-side and continuing straight on until the crossing. The Grimana Tower of SAN VITO AL TAGLIAMENTO (km 15.2 ) is in front of us. We go left and then immediately right into piazzale Girone where we take the bicycle path of via Marconi, and we enter the elegant, central piazza del Popolo. (Offering important buildings and works of art to visit). We go left, pass the Raimonda Tower, continuing straight on into via Pomponio Amalteo and at the crossing turn right (turning left instead one arrives at the railway station).

We follow a street that curves to the left, going over a level crossing and at the fork (little church) keep to the right until the traffic light. Once past the crossing, after a few metres we turn right into via Prodolone, which we follow until another fork where we take the narrow street to the right along a canal. We are in the square in the centre of PRODOLONE, with its castle and church (to visit). At the roundabout ahead we go right (indications for Casarsa), at the fork we keep to the right and continue straight on in via San Giovanni (with stretches of bicycle path). We pass a level crossing and empty out into the wide and busy via Villa (Provincial Road 1) (km 19.2) which we follow to the left.

We are in SAN GIOVANNI DI CASARSA. We leave via Versutta to the right (which in 1.6 km takes us to the little church of Sant'Antonio Abate and its fountain) and we continue, passing the loggia and parish church, until the end of the residential area and, when the street curves sharply to the right, we take a small lane to the left. We pass a level crossing on a stretch of dirt road, then return to asphalt; we pass under the railway line, and at the crossing we go left along via V. Veneto. We are in CASARSA DELLA DELIZIA. At the roundabout we go straight on (on the right we see the railway station) and we arrive at the traffic light on State Road 13 (km 22.1).

We cross over a pedestrian crossing and continue straight along the narrow main street; at the fork (marker) immediately after the church, (to the right one proceeds for 800 metres for the cemetery with the grave of Pier Paolo Pasolini) we go left in via Menotti until the roundabout where we proceed to via Trieste which at the next roundabout continues to the left. At the first houses of SAN LORENZO we turn right into the narrow via della Pietra. While continuing to follow the main street and ignoring the side streets, we arrive at a crossing (on the left the dirt road via Muratti), where we continue to the right and shortly after we find a small roundabout with a marker that holds up a golden map of the world.

We keep to the left on an asphalt street via Maiaroff, we cross a street with a fair amount of traffic and arrive at another small roundabout where we go left into via Fiolina which takes us to the gates of VALVASONE. At the crossing (km 28.3) we continue in front of (wrong way to the right) a street that curves to the right and at the roundabout we turn left into via Bando (to the right is the Market Square in the centre of Valvasone). Al the STOP sign we turn left into via Risorgimento and at the crossing we go right (indications for San Martino) along Provincial Road 37. Having arrived at ARZENUTTO, at the crossing we go left along via Principale, at the fork we keep to the right and arrive in piazza Umberto I, (we are in SAN MARTINO AL TAGLIAMENTO, in front of the Town Hall).

We go to the left, following the square and leaving the church on the left, entering into via XX Settembre. We pass a small crossing, and shortly after we turn left into via Richinvelda. In the middle of the countryside, we cross the district of Bosco di Arichis and arrive at a crossing with Provincial Road 6 (km 34.7) which we cross, continuing straight along the irrigation canal until a crossing with the locks of the canal. We go left and turn right immediately after (small bridge), continuing on an asphalt road. With a long straightaway amidst open stretches of vineyards, we arrive at a crossing where we turn right (small bridge) into via Delle Prese. We continue straight on, flanking a small lake and the church of Sant'Antonio and we enter the town of BARBEANO.

At the crossing, (km 41.9) we go left into via Montello, and at the fork we keep to the right, entering via Monte Hermada (drinking fountain on the right) while after 300 metres we turn right into via del Torrente (indications for Spilimbergo). Just after the bridge over the torrent Cosa, we turn sharply to the right toward the sports field and proceed along via Santa Maria del Bussolino. After passing a little church, we arrive at a crossing where we go left along via Concordia. We cross the tracks, pass a modern church and exit into via Borgo Navarons where we fork to the left. Along a rather busy tree-lined avenue we arrive at a traffic light. We are by now in SPILIMBERGO. We cross State Road 464 and continue along via della Repubblica, passing the traffic light (to the left is the ex-railway station), at the roundabout we go right into via Mazzini and exit shortly into the very central piazza Garibaldi. This represents the terminus of our route.

From Sesto al Reghena we have pedalled some 48.2 km.