From the pearl of mosaic art to the city of knives 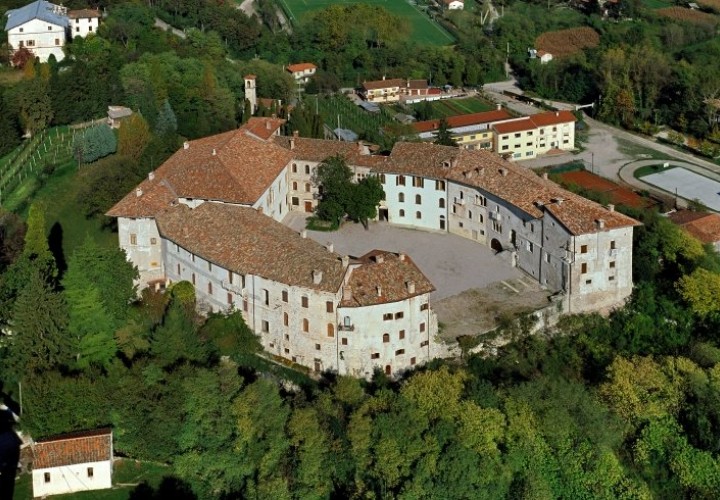 The route begins from the central piazza San Rocco in SPILIMBERGO (km 0.0). We take a tree-lined viale Barbacane and after about 370 metres we turn left intovia della Roggia which we follow, ignoring the side streets, until the crossing where we go left and then immediately right along via Filanda Vecchia. Following the straightaway we cross the tracks and pass by BASEGLIA where we arrive in GAIO; at the crossing we turn left into via S. Marco and then left into via N. Sauro(via Oberdan in the opposite direction) which takes us into the Provincial Road 1, where we take the right fork (km 4.1).

After about 900 metres along a somewhat trafficked street, we turn left (direction of Lestans, Castelnovo) and shortly we reach the STOP sign of BORGO APPIANO. We turn left (direction Lestans) and immediately after we turn right into the road for Castelnovo. (If we were to proceed straight on for Lestans, after several metres we find an old 16th-century mill and after 600 metres we reach the centre and the 16th-century Villa Savorgnan.) We go toward Castelnovo, along a wide street, (from here we follow the Pedemontana FVG no. 3 bicycle trail and its indications) we pass the level crossing and turn left toward MADONNA DELLO ZUCCO; we pass a short incline and church, and at the next fork we go left (SPESSA district) and after a small bridge (BELUS district), we turn left again.

We cross GRAVES and the bridge over the Cosa Torrent and, after another brief incline, we arrive at a level crossing (km 10.1), which we do not cross, continuing instead straight on. Having passed MOLEVANA and the indication for Pontic (an evocative ancient bridge on a ravine of the Cosa Torrent after 50 metres), we cross a street and continue until finishing in the Provincial Road 22 which we take to the right, near the church of San Pietro. We follow via Roma (leaving the cycle path that turns to the left) and we reach piazza XX Settembre, in the centre of TRAVESIO (km 13.0). (To the right one arrives at Val d’Arzino, at Castelnovo, Clauzetto and at the grottoes of Pradis).

We instead continue and turn left (indications for Toppo), following via Villa; at the fork we turn right along Provincial Road 32 (indications for Toppo) and along a wide street a bit trafficked, we travel about 800 metres and, when the houses finish, we take the Bicycle path FVG 3 on the right. Travelling along one of the most beautiful stretches of the itinerary, with the plains lined by hills on the left, we proceed straight on, cutting across two asphalt streets, and we see the entrance to a quarry as we arrive in TOPPO. We pass by a church, and at the fork we turn right into via Dei Masi, at the fork after a widening in the road we turn right into via Verdi (detour: via delle Colonie to the right that leads to the Castle) and we arrive at the Palazzo Conti Toppo-Wassermann (tourist office) (km 16.9).

There we turn left into via Castello, and at the large crossing we go right and then immediately left into via Solimbergo. Along the fields, we pass a level crossing and arrive at the State Road 552, which we take left (indication for Sequals) (km 19.4). We flank SOLIMBERGO (A small road on the right that leads to the castle) and, after passing an upward road and a tunnel, we descend along the woods to SEQUALS. Straight on for via Ellero we arrive at the crossing (road signs) and turn right where we travel along piazza Pellarin (and the Town Hall); then, keeping to the right we enter via Odorico, (detour for villa Carnera) which continues with a wide curve toward right and then straight on we exit onto the heavily-travelled State Road 464.

We turn right, cross a bridge over the Meduna (panorama), we enter COLLE and turn immediately left into via Arba(km 24.8). Along a wide, tranquil road we reach ARBA. At the STOP sign we turn left (Town Hall), and we proceed straight on until the crossing just outside town (km 28.6) where we continue to the left. We cross a bridge over the Colvera Torrent and we arrive in TESIS. Following the principal road (to the right the Antiquarium may be visited) we go right, pass in front of the church, and continue left. Having passed the wide roundabout we arrive in BASALDELLA. At the crossing with Provincial Road 23 (km 34.5), we turn right (indications for Vivaro), and we pass in front of the ex-barracks and we are in VIVARO. At the second crossing we turn right and pass in front of the church.

Crossing the roundabout we continue straight along the much-trafficked street Vivarina (Provincial Road 27). Having reached the characteristic modern church in DANDOLO, we proceed for about another 750 metres and we take the right fork, in via del Canale (km 40.6). At the crossing we continue along the street in front, which then becomes a dirt road, until the next crossing on asphalt where we turn left into via dei Meassi. We are in CAMPAGNA. After about 600 metres we turn right into via dei Radici which we follow until the crossing with the roundabout via Marco Polo. (km 48.8) We are by now in MANIAGO. We continue with via Sacile in front, and at the roundabout we continue along via Caterina Percoto where, at the crossing with the tree-lined viale Pordenone we go right.

Continuing straight on we pass the level crossing and the traffic light along via Dante where we arrive at a small roundabout where we continue. At the crossing we go necessarily right into via Umberto I and then we reach the very central Piazza Italia, where our itinerary ends.

From Spilimbergo we have travelled km 51.0.