From the slopes of Mount Cavallo to Portus Naonis 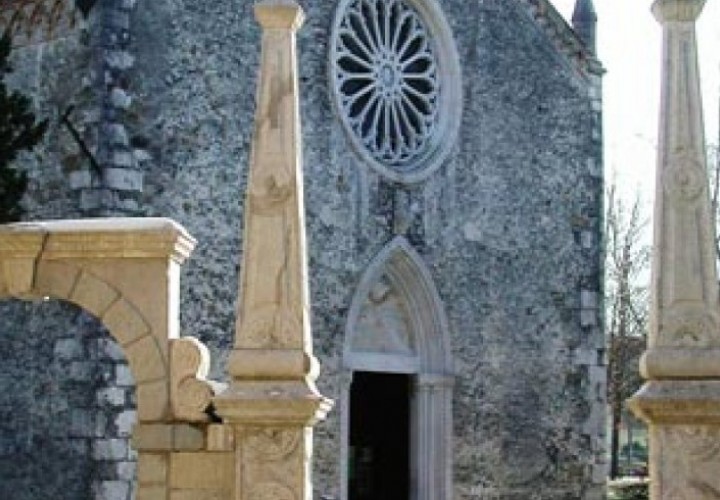 The route begins in MANIAGO in the very central PIAZZA ITALIA near a fountain from 1846, a short distance from the Gothic Duomo that dates back to the 1400’s (km 0.00). With our backs to the Town Hall we head toward via Umberto I in the direction of Maniago Libero; we keep to the right along via Piave, at the roundabout we proceed to the right into: via Piave – via Vittorio Veneto – via G. Mazzini and arrive in Piazza Cavour in Maniago Libero where we continue right into via Angelo dal Misro until the STOP sign at State Road 251 (Km 3.30).

From here we turn right into via Montereale Valcellina, we pass a bridge on the Cellina Torrent from whence we can make out a ravine with the profile of the “Ravedis Dam”, we continue along a slight incline and at the end of the road on the left there is a cemetery with the parish church of San Rocco. At a crossing after the sign for MONTEREALE we turn right into via Roma heading toward the centre, and we reach a square with its Duomo (Km 6.50). From the centre of the square we continue to the left along via Dante Alighieri in a one-way street and at the STOP sign we turn right into via G. Verdi in a two-way street and after about 200 metres on the right we reach a little church dedicated to San Floriano with interesting frescoes; we proceed by following the street via dell'Omo.

At the big roundabout we take the second exit and continue along via dell'Omo, leaving on the left an old brick factory, and we arrive at a STOP sign in viale Stazione. We turn right and proceed until the crossing, and then follow the indications for the Pedemontana Bicycle Path FVG no.3. We turn left into via S. Martino which we travel for about 350 metres until via Sottocollina along the directions of the bicycle path ( km 8.90). The bicycle path occupies its own land – it has only a few stretches to be shared with agricultural vehicles, and it flanks the Sacile-Gemona railway line. We follow the path and at the end (Km 9.90) be careful of the sharp curve with a brief incline of 15% whose warning sign, in the high-growth season of the local vegetation, risks not being visible “attention – a rapid descent with the bicycle is recommended so as not to risk breaking the chain in case of a delayed gear shift”.

The bicycle path crosses Via Dalmazia (detour to the right toward the Malnisio district km 1.80, at the A. Pitter hydroelectric power plant, built in 1895), and we proceed following the indications along the path, passing under the water conducts of the Giais power plant (no longer in use, previously it used the discharge waters from the Malnisio power plant to function) where we arrive for a brief rest at the little church of San Biagio (built by the Templars in the 16th century) (Km 15.60). Going forward we reach the ancient town of MARSURE in Via Santa Caterina where the bicycle path ends (Km 17.35) in a road the turns left where we find the church of Santa Caterina (frescoes by Girolamo Stefanelli da Porcia, the painter also of a cycle of frescoes dating back to 1544-1547, which decorate the presbytery of the little church) (km 17.70).

We cross the bicycle path along the pedestrian crossing and after an arch we enter a stretch that crosses a park, until we reach the end of the bicycle path in via De Zan; we turn left toward the pedestrian crossing, we go across the street and we reach Piazza del Duomo (dedicated to Saint Zenone, begun in 1775 and finished in 1832. The bell tower dates to 1550). From the square we take via Roma and at the crossing we turn right into Piazza Giovanni Matteotti; we pass in front of the Town Hall and continue to the right into via Gugliemo Marconi. At the crossing with traffic light we continue straight along via Marconi where we are in the district of Somplago (Km 20.70). At the crossing “bicycle path table” we go left and then immediately right into via Vicin which is still part of the “bicycle path table” and following the table to the left we turn into via Fantin, to the left into via Montello, to the right into via 4 Novembre in the direction of BUDOIA and we arrive in via per l'Ortugna in the Fornaci district.

After a little bridge we turn left (Km 23.10) “bicycle path table” in via Cial d'Avian, in descent, we pass the Artisan Zone of Budoia and we arrive at the STOP sign with via G. Verdi where we turn right, and immediately in front of us we take the bicycle path of via Viola which leads to the residential area of Budoia. At the STOP sign we turn left in the direction of the train station, the street having a slight descent (Km 27.90). In front of the station we continue to the right toward via D. Alighieri and “carefully”, immediately on the left we take a dirt road, in bad condition and with a slight descent, we travel carefully to a three-road fork to the right “beautiful bicycle path in via della Lama leading to Polcenigo”; we turn left (Km 28.20) in the direction of the Sacile-Gemona railway underpass, we proceed straight on, leaving to our right a shrine dedicated to Saint Anthony; we pass a little ford, continuing until we pass a little bridge over an irrigation canal (Km 30.60) where the long via Prati begins and stays with us until the traffic light crossing in the Forcate district.

We go past this and enter via G. Marconi; at the STOP sign we cross the road and continue straight on to the centre of the Ceolini district, where near the church we turn left into via Giotto in the direction of Roveredo in Piano (Km 35.70). The street continues slightly to the right until the crossing with via Valessa which we take, proceeding through an industrial area; at the STOP sign we go right into via 20 Settembre and after about 150 metres we turn right into via delle Arti e dei Mestieri until the STOP sign with via Brentella (Km 37.50); we turn right and after about 50 metres there is an industrial area on the left of via Consorziale at the end of which we turn right and then immediately left where we proceed straight along via Castelfranco Veneto until the crossing with traffic light with the Pontebbana State Road 13. We cross and immediately in front of us we take via del Troi and then the new foot and bicycle path to the left until the end where, turning to the left we take the bicycle path in via Michelangelo Grigoletti (Km 40.50).

With this, we reach an important crossing with a traffic light designed to regulate also bicycle traffic; we go right, pass the next crossing with a traffic light at via Oberdan and after crossing we take Corso Giuseppe Garibaldi where motorised vehicles are prohibited in various parts and with the pedestrian zone permitted two-ways, also for bicyclists. At the end of the Corso we arrive in Piazza Cavour, the historic centre and ancient heart of Pordenone (Km 42.30).

End of the itinerary.